My flight to Melbourne is scary… On landing in Avalon Airport, the plane tilt at a steep angle and landed with the front wheel touching the ground before the back wheel. I thought I was the only one who is scared, however, once landed, everyone is cursing on the way the pilot is flying. I guess, during landing, everyone was too scare to make any noise.

After landing at Avalon Airport, bought a bus transfer to Melbourne city. The journey took me 1 hour. My final destination was Queen Victoria Market. The night was windy and I struggled to find my way, in the middle of the night, to my lodge.

Tonight I will be staying with a group of 7 young christian man. I was linked up by Yanbing with a group of students who is staying is a lodge. For the next 3 nights, I will be bunking with them. Manage to find the lodge after calling and confirming with Brandon… my host for my stay in Melbourne…He is a student in Uni of Melbourne.

I have arrange to meet up with Yanbing and Priscilla Ong in Queen Victoria Market (QVM) for early breakfast today. It is nice meeting up with them again. We were working together volunteers in Singapore Youth for Christ for many years. As for Yanbing, we grew up together in the ministry. Yanbing has been staying and working in Australia to close 2 years. Priscilla has also been in China for the last 2 years and has recently returned to Singapore. Have not been catching up with the both of them for quite a while, and it is wonderful to meet them in Melbourne.

After breakfast, we depart our ways and have arranged to meet up again at the nearby train station in the evening. As for me, I went back to my lodge to change to appropriate attire for a meet up session with a Security Manager in ANZ. From  QVM (my lodge is near there), I walked across the city from one corner to another corner for a good 30 min. I did not know ANZ building is located so far from QVM. Manage to reach there in time for a time of interection with the manager. After the session, I spend the rest of the afternoon walking around in the city.

While in the city, getting tired, I approached a City Ambassadors (who is dressed in distinctive red uniform) and asked her what I can I do in Melbourne that is FREE…. As their name implies, they are truly approachable and friendly. With a polite smile on her face, the friendly lady excitedly led me to a nearby bus stop and hand me a brochure, and started explaining to me the things I can visit while taking the free hop-on hop-off Melbourne City Tourist Shuttle …

Not knowing what to do, I boarded the bus and just enjoy the journey as the bus makes its loop round the city.  While bus makes it journey, notice that I am boarding the last shuttle bus through the city. I run through the brochure and decided that I will make my stop at the shine @ botanical Garden, since I had never been there for the last 3 trips in Melbourne.

Visited the Shrine of Remembrance which is Victoria’s memorial to the service and sacrifice of its men and women in times of conflict.

From Botanical Garden, I took a walk back to the city to catch-up with my uni friend, Riza. Riza was my senior while I was in QUT. He was a PhD student while I was doing my honors year in 2002. We are also fellow co-workers in the security laboratory in QUT.  As usual, meeting friends from QUT, always remind me of the good time I had while I was a student in QUT.

As the sun start setting, I made my way to the central train station to meet up with Yanbing and Priscilla.

We pick up the rental car in city centre and we head up to Dadenong. Stop along the way to have some tea and scorns for breakfast. Spend time talking and catching up with Pricilla and Yanbing.

Did some short walks around the national parks before heading back to city, where Pricilla and Yanbing is involved in one of the program organised by OMF ministry. 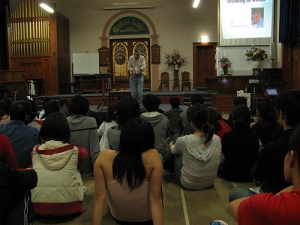 We left City at around 5am. Pick up some of our friends before heading up to Great Ocean Road. 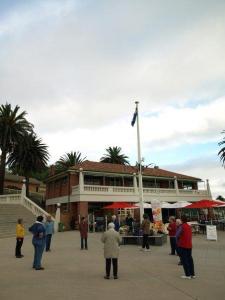 Some Picture Memory at the 12 Apostles: 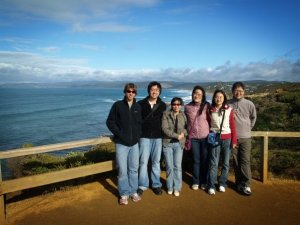 We left the 12 Apostle at 4pm and reached Melbourne at 8pm.

Bid goodbye to Melbourne as I took my flight to Perth.