After spending 6 months reading up on Japan, this will be our first trip with Jaydon to Japan.

While checking-in for our flight to Osaka, the check-in staff gave Jaydon a small gift. We thought it was a puzzle box, but it turned out to be a kid’s ink set with iconic symbols of Changi Airport. Pretty nice!

Had our lunch in the airport before heading to the gate for our flight to Osaka. All of us were on holiday mood and as you can see in the pictures, we were excited for the trip.

Flight entertainment were a mix of Movies, Ipad games, homework and activities book.  Our Flight was at 2pm and it took 5.5 hours. Lunch was served in the plane, and we were surprised they served lunch at 3pm (time when the plane is at cruising speed). I would rather they served dinner instead. We requested them to serve Jaydon’s meal at a later time and it was our first time knowing that you could request to serve your meals at a later time (within an hour). 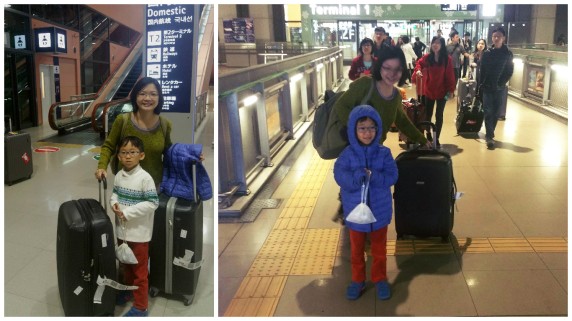 Jaydon was so thrilled when he stepped out of the airport. The air was cold & crisp when he exited the airport.  He exclaimed that it was really cold. We were worried, but before we could react, he exclaimed “I loved it!”.

We took Haruka Express which cost 3,030 yen (one way) with a 1000 yen  credit on ICOCA card (Subway card which you can use when you are traveling around Japan). This option is the best for us, as we were staying in Shin-Osaka. Haruka Express has a direct train to Shin-osaka. The ICOCA card came in handy for us when we travel in the subway across Japan.  ICOCA card can be topped up in any subway station. 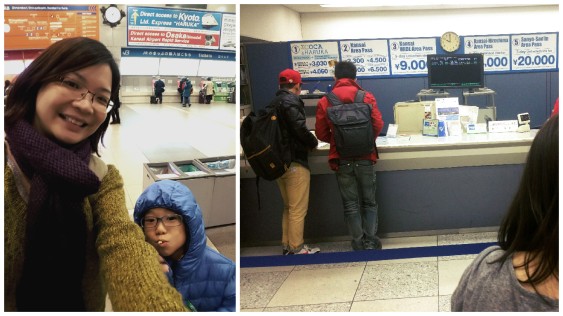 Note: ICOCA card is adult fare. Kids should not use ICOCA as they get kids fare traveling the subway. You can choose to pay the price per use or get a day pass which cost 300 yen.  I usually get a day pass for Jaydon, as it was pretty reasonable. It will takes 2 rides to break even the cost. 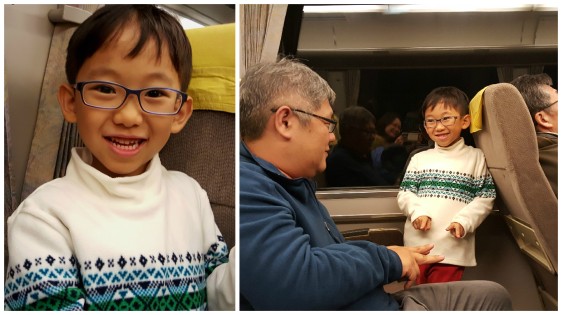 We reached Shin-osaka at 11.15pm. We navigated our way out of the massive train station towards the direction of our Airbnb accommodation. The accommodation was  next to the east exit of the station. 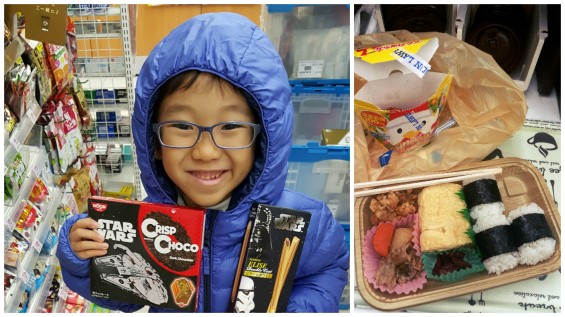 It was not a good start for our holiday, when we realized that the apartment main door was locked. Apparently, the door locked after 11.30pm. I called up the host and realized that he had put our key in the apartment, which we were not able to retrieve since we were lockout from the apartment. He apologized and asked us to wait for an hour for him to get down.  While waiting, we went to the nearby Lawson Convenient shop.  As we did not had our dinner, we got ourselves some sushi and snacks and camped at Lawson while waiting for help. After 15 mins, we were getting tired. I decided to do what I was trained to do – to break into the security of the apartment. I went back to the apartment and waited for the opportunity to tailgate someone into the apartment.  Waited for the right moment and managed to break into apartment and retrieved the key to the room.

And here we were, all comfortable and warm in our humble room.