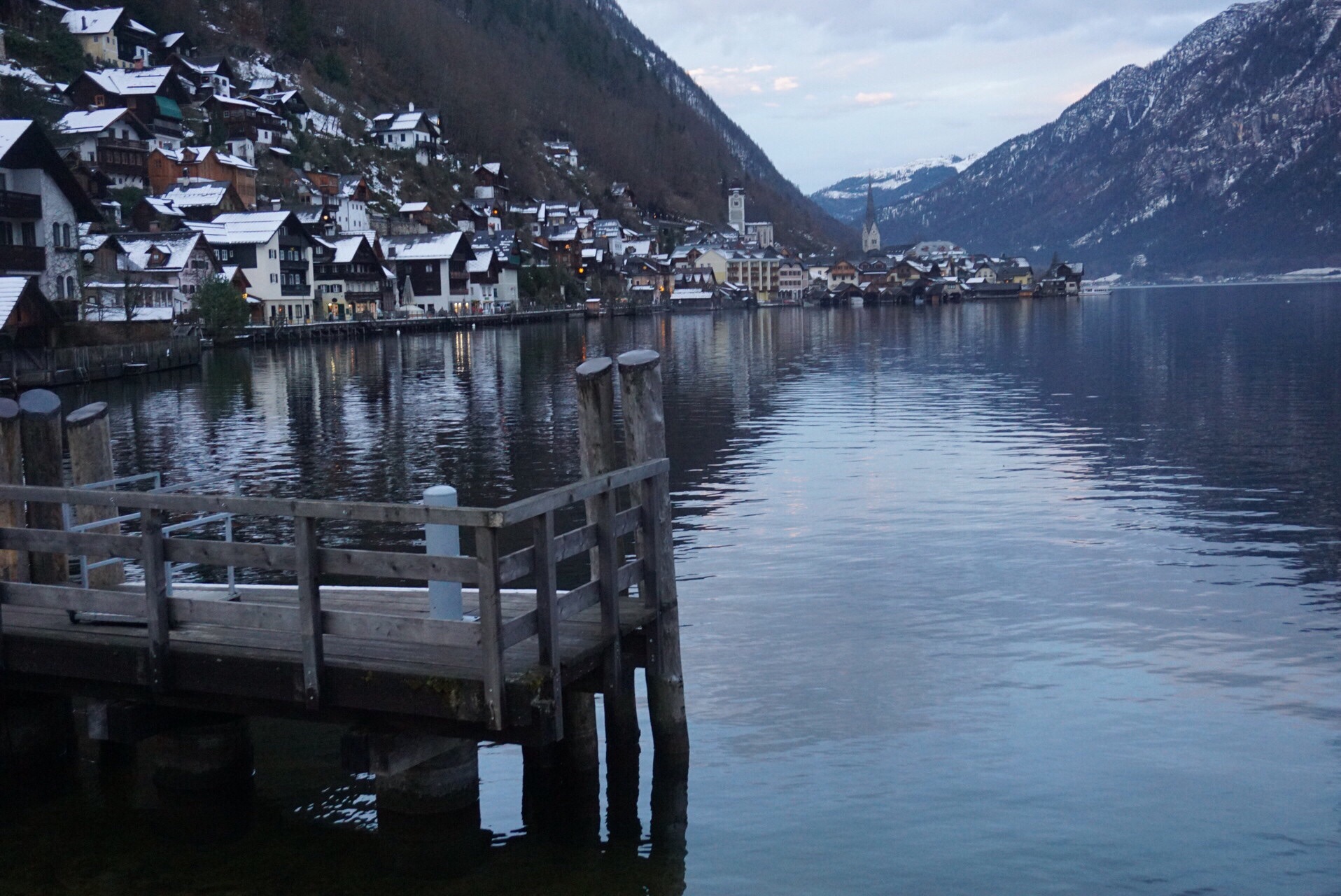 Is our last day today in the beautiful Salzburg. As we leave Salzburg, we hope that one day we will be back in this beautiful city. We will be making our way to Hallstatt through Highway route A10 towards route 162 & 166.

Our first stop on leaving Salzburg – a frozen lake! 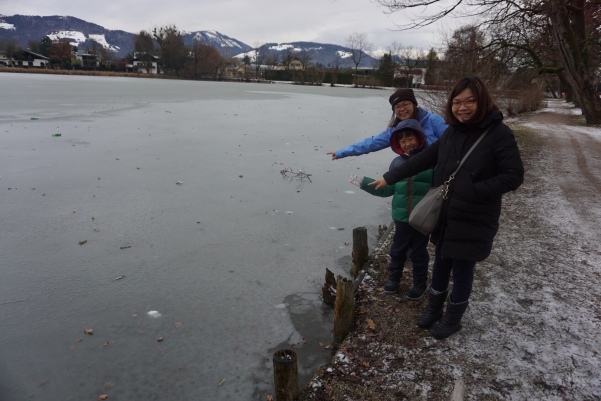 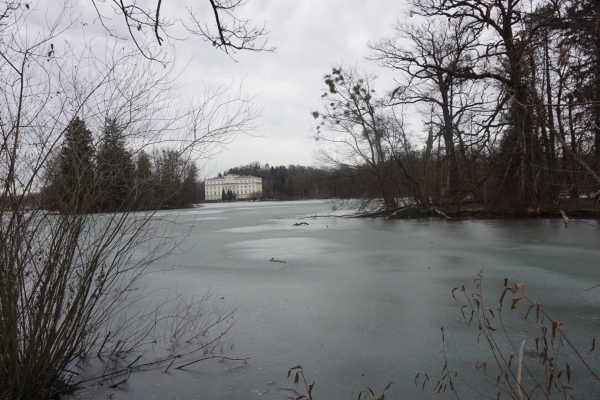 Schloss Leopoldskron one one of the main exterior location used in the Sound of Music. For those who are familiar with Sound of Music, this is the location where von Trapp “stayed”. In fact, 10 outdoor scenes were filmed there portraying the von Trapp home. Only outdoor, as the interior was never used in the movie. 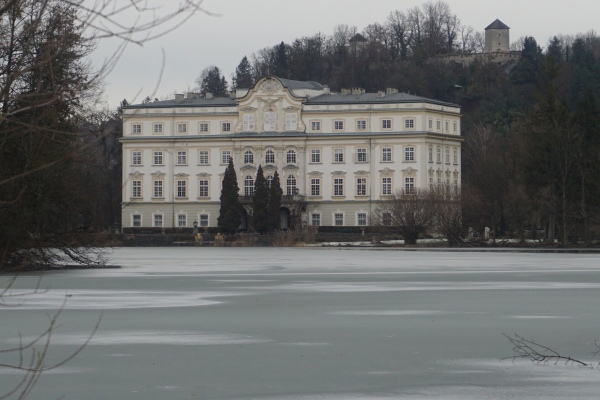 There is a park at the lake and we did have some fun in the cold while we were there. 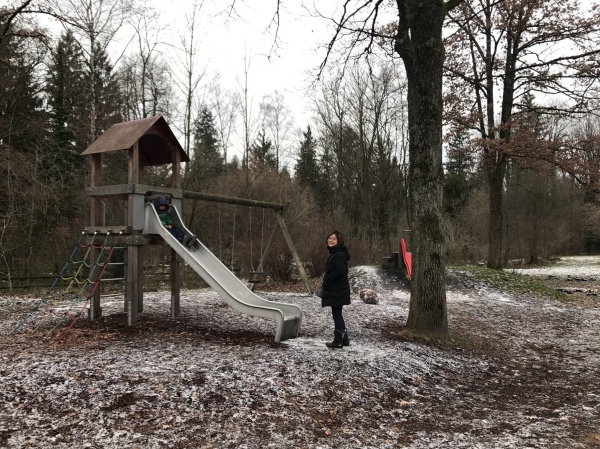 Before leaving Salzburg, we drove by  Schloss Frohnburg. Another Sound of Music site, in which it was used for the exterior shots of the Trapp villa. The real Frohnburg serves these days as a dormitory and concert venue for the Salzburger Universität Mozarteum, the art University.

All of us have to change to protective suit before we were allowed to enter the mine. 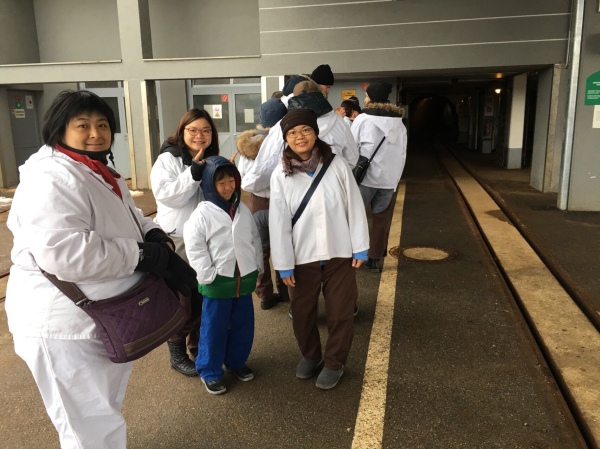 To enter the mine, we need to take an original mine train deep into the mountain. It was going at a high speed (at least it seems fast in the tunnel where everything is dark). 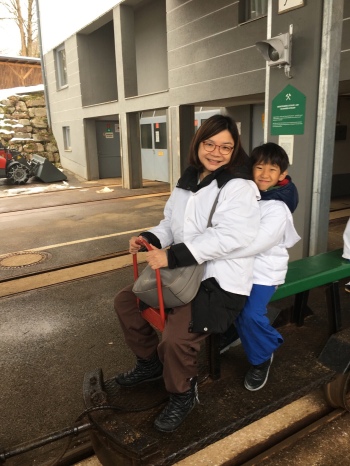 The tour is pretty interactive, where there are stops in every section of the mine where the guide (as well as virtual guide) will share the history of the mine and history of Salzburg. The spoke both in German and English. 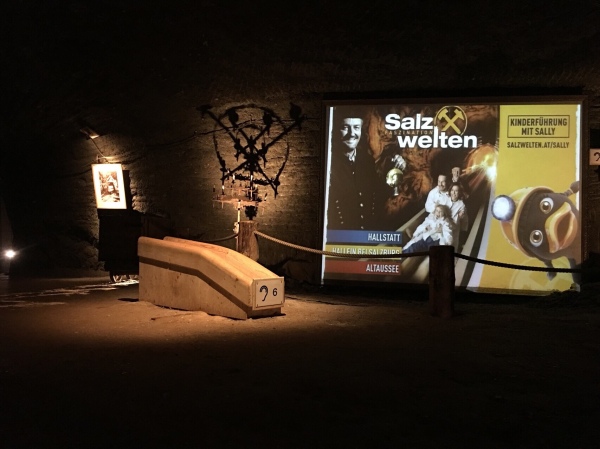 Interestingly, The tunnel in Hallein Salt Mine cuts across 2 countries – Austria and Germany. Therefore, while walking in the tunnel, there will be signpost that inform you that you have closed over to Germany in the tunnel.

The highlight of the mine tour was the sliding down 2 slide used by miners when it was in operation.

There is a light show on a subterranean salt lake where we sit in a boat that cruises across the lake, but it was nothing to shout about, as compared to sliding the slide with the family. 🙂

After the tour, as we go deeper into the mine, we were worried that we will need to climb back up. However, we were relieved, when we saw an escalator at the end of our tour that bring us up the mine shaft without needing us to climb back up. 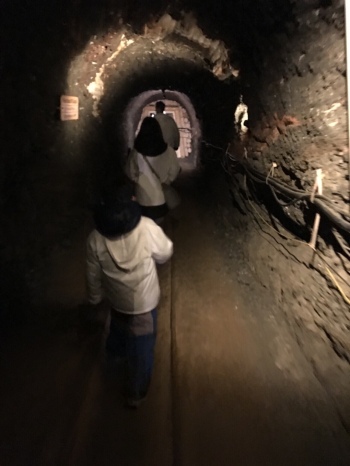 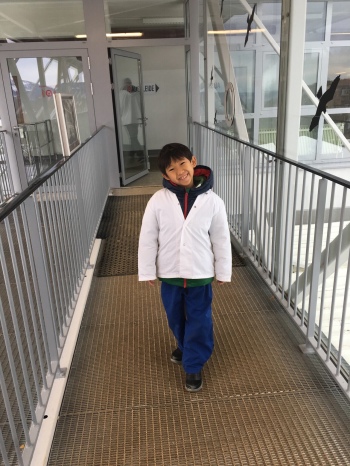 After the tour, the ladies went on a shopping spree for salt!!

Jaydon and myself decided to head to the car while waiting for the ladies. Seeing a slope at the carpark, we decided to do a quick sled. 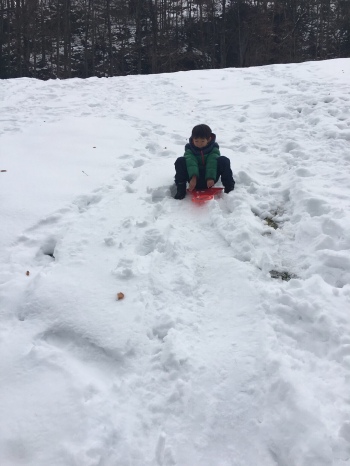 After all the walking in the mine, we were hungry and tired. We decided to head down the nearest town – Hallein. 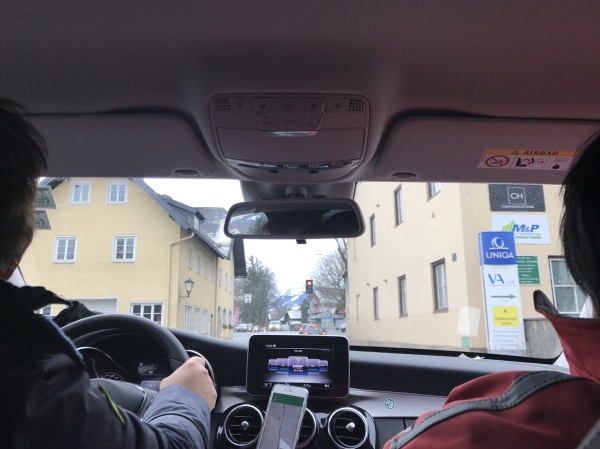 With the help of Google, we found a place that was rated 4.5. It was Stadtkrug Hallein. It was a cosy little place on the second floor. As it was Aunt Lynna birthday, we decided that we will feast together!! We make our order and we have fun time sharing and tasting authentic German / Austria meal.

After a quick walk around town (which is small), we decided to be on the road for our ride towards Hallstatt.

After 1 hours of driving alone A10 highway we exited toward Hallstatt through winding and narrow road all the way to Hallstatt. 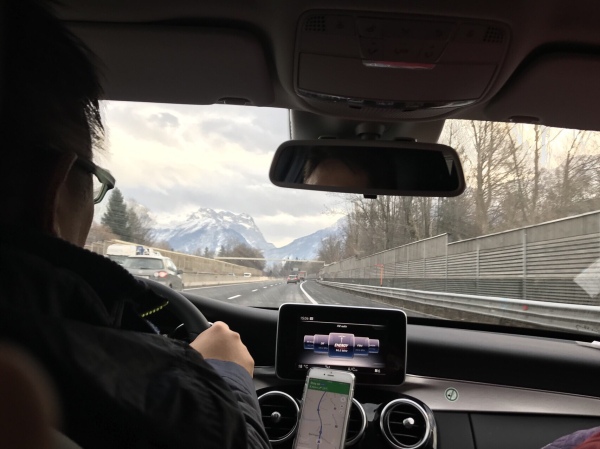 At some point, I felt that the GPS is not guiding me correctly, the road is too narrow and I realize that there is a parallel road to the one that we are driving.  The only consolidation for driving on snow filled, winding and narrow road is that the road condition remains good. Total control of the car throughout the journey.

After around 3 hours drive, we reached Hallstatt. We make a stop at the Tourist Information Center at the south side of Hallstatt. From there we can have a good view of the famous town of Hallstatt that even the Chinese is creating a replica town in China. 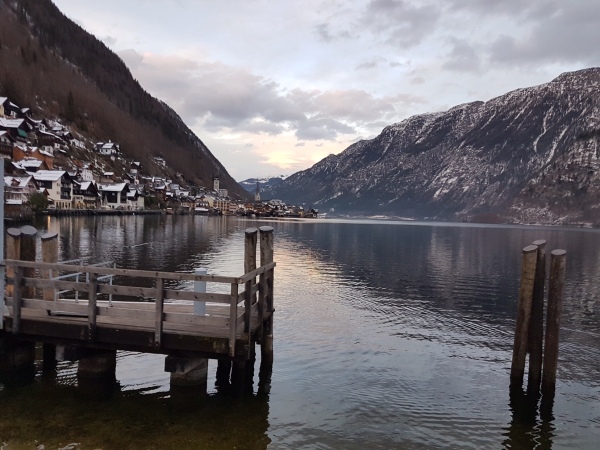 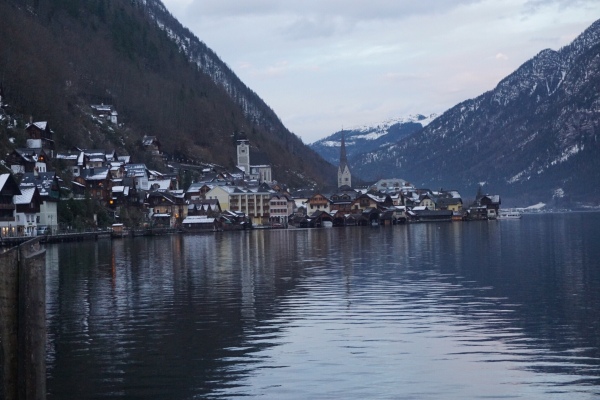 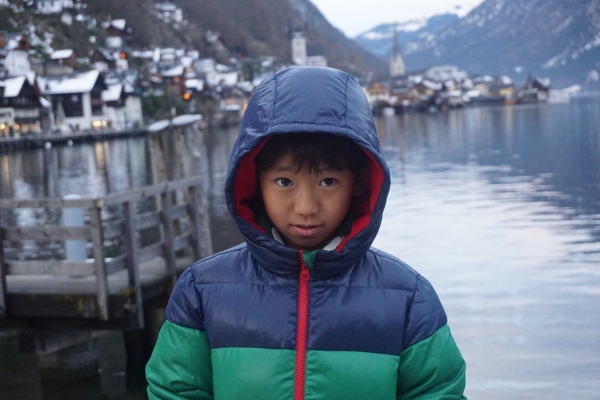 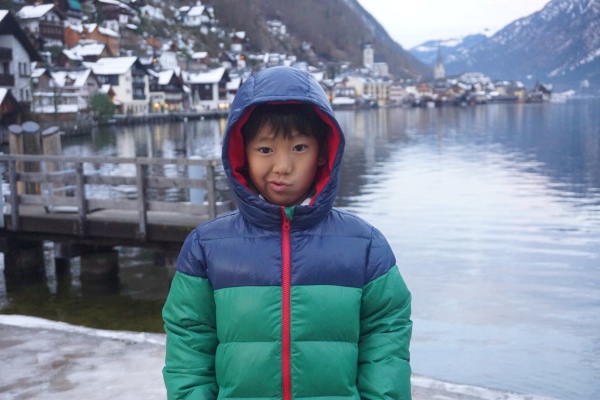 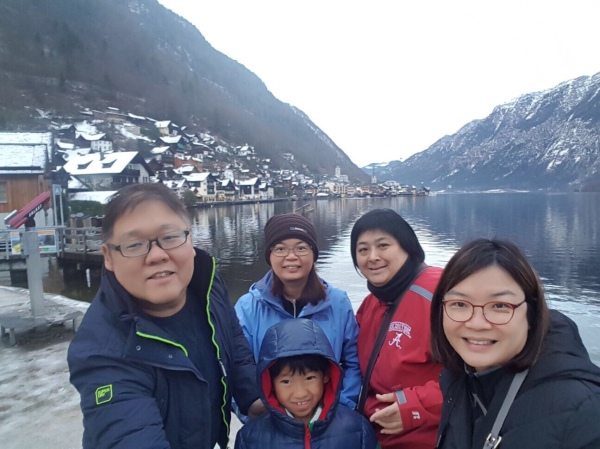 Cost of accomodation  in Hallstatt is way beyond our budget, and so we decided to stay in the nearby  town of Obertraun.

We decided to stay in a highly recommended Airbnb lodge in Obertraun – Landhaus Lilly. We never regret staying at Landhaus Lilly. On arrival, Liz was at the door to greet us warmly into their house. Her smile warmth our heart as we felt so welcome to the house. The rooms was spacious and clean.The whole place is nicely furnished and decorated with Christmas ornaments. You really feel that it you are having a lovely Christmas holiday in the house. 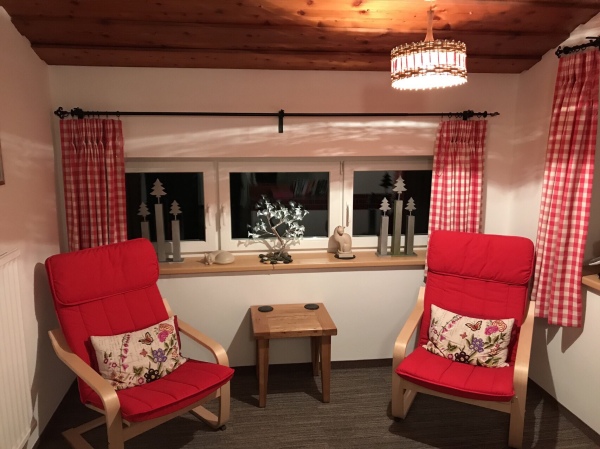 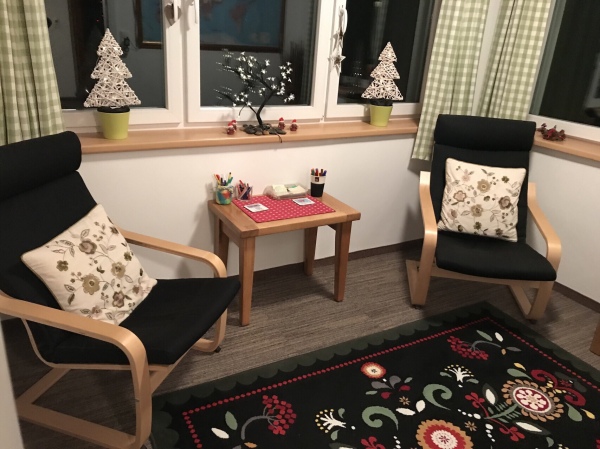 After a Long day drive every one just chill out in the little corner within the house. Aunt May and Lynna rested in their room.

Played a Game of chess with Jaydon in the chill out area, while mom rested on sofa. 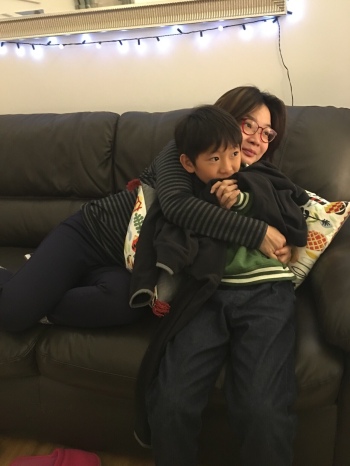 We were the only guests during the low season, and therefore, we have the house all to ourselves. The room was spotless clean, very nice and spacious. More on Landhaus Lilly tomorrow.

For the night, we head to the nearby cafe for dinner, before heading back to Landhaus Lilly for the night rest.